“Workers are not Beggars,  they are the salt of the earth.
“What would be the world, brothers, were the workers to stop work?
“Take it from me, Brothers, that petitions and memorials and supplications will count for nothing so long as you do not organise yourselves in a manner to convince the government that you will no longer stand nonsense.”  – Tarapada Mukherjee , Lahore Speech  on 9th October 1921. 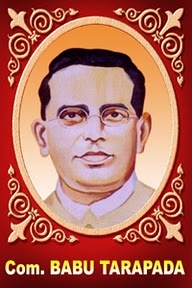 91 years back on  9th October  1921, Babu Tarapada Mukherjee, one of the pioneers of the P&T Trade Union movement, thus  roared in the Lahore All India Conference of Postal & RMS Employees Unions , exhorting the workers to organise and struggle for their demands against the British colonialism and the Postal Administration. As the newly elected President of the Union, he called upon the workers that there is no other way but to organise and struggle. He analysed the capitalist system and the need to fight against it for justice to the workers.  One can just wonder that how a postal employee can attack and expose the government and administration in such a way when the British were ruling not only India, but a good part of the world itself.
The Government and the Postal administration were naturally enraged and issued charge sheet to Tarapada proposing dismissal. He was told that if he apologizes for his speech, he may be excused. But Tarapada was of a different  mettle. He gave reply justifying each and every sentence he uttered and braved the Postal administration. Of course, he was dismissed from service. But he stood with the workers till the last and served their cause. The Lahore Speech was a great turning point in the history of the P&T TU movement.
The P&T  TU movement was built up by such great leaders. Henry Barton, B.N.Ghosh (Dada Ghosh), K.G.Bose, Adinarayana, N.J.Iyer – there is a long list of leaders who made the P&T movement, what it is today.

Let us remember that it is our duty to continue this great tradition to march ahead for the workers cause.
Email ThisBlogThis!Share to TwitterShare to FacebookShare to Pinterest
Newer Post Older Post Home